I was honored to join First National Wealth Management (FNWM) last week for a double panel discussion on how we can find the right intersection of philanthropy where both donors and nonprofits benefit.

Pete from FNWM and I were speakers in the first panel, exploring the nonprofit perspective. Nonprofits view a donor relationship as impactful from various perspectives, the most obvious being a donor who writes a big check with no restrictions or strings attached and asks for nothing in return. But that can be short-sighted. The more effective nonprofits I have worked with see donor relationships from a long perspective. They want the relationship more than the one-time donation. The relationship offers much greater potential in the following ways: (1) the donor gives more or gives repeatedly over time – continuing support from a donor is important to the nonprofit for cash flow, longevity, and growth reasons; (2) the donor ends up giving more than they might have without the relationship – once donors feel part of the cause and understand its needs, their willingness to be more supportive increases; (3) the donor becomes involved with the organization, writing a check and also volunteering at events; and (4) the donor becomes an evangelist for the nonprofit, telling her/his friends about the organization’s important work, involving then in events, friendraisers, and encouraging them to donate.

I moderated the second panel, where three donors were panelists. Susan, Deirdre, and John approached philanthropy from different perspectives, but they all shared that their goal was to give back to their community. An early comment in the second panel was about the importance of parents in teaching philanthropy by example. One panelist said it was never discussed, but it was clearly part of the way her parents raised her. We explored engagements that were impactful as well as those that turned them off. One of the panelists talked about the importance of getting involved beyond just writing a check, sometimes participating in activities and other times wanting progress updates on specific initiatives. Another talked about the decision to support a nonprofit being similar to making an investment in a for-profit business, with due diligence and the need to understand the business case for success. We discussed the issue of nonprofits staffed entirely by volunteers versus those with paid staff and the question of compensation for nonprofit executives.

The donor panelists all agreed that the quickest way to turn them off is for them to get the impression that the nonprofit views them as a checkbook. Transactional engagement is not the way to build a long-term and mutually-productive relationship where both parties win.

Thanks to Niki and her colleagues at First National for the hard work they put into this event. It was a real service to the community and something in which I was proud to play a part. I am also appreciative to the panelists and their courage in sharing their personal stories. For many, charity is a deeply personal part of their lives and not something they talk about publicly. Their participation was its own kind of investment in our community and I am grateful. 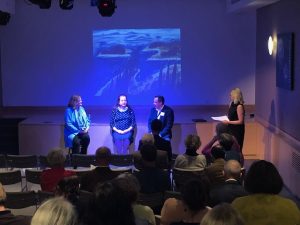